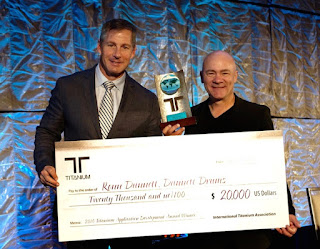 Musician, designer, and innovator Ronn Dunnett is the recipient of the International Titanium Association’s (ITA) 2016 Application Development award. The award lauds Dunnett for his work in the development and perfection of a titanium drum shell. Members of the ITA’s executive board presented Dunnett with the award at Titanium USA 2016, the thirty-second annual international conference and exhibition sponsored and organized by the ITA. The TAD award, which includes a prize of $20,000, is intended to distinguish and remunerate work and help support the continued development of the application. “This is my Oscar, my Grammy, my Juno, my lifetime achievement award,” Dunnett said. “But it’s even more than that. It is the ultimate vindication. My work has never been about anything more than the relentless pursuit of quality sound. Awards, particularly in my industry, are often cynical. To receive the ITA Application Development award, especially from an organization outside of the music industry, that is as real as it gets. Recognition that says you’re the leader, you were the first and the best and who or whatever ever else comes after is derivative. It is an award that I am humbled by, but am so proud to accept.” Dunnett has created titanium drums for many high-profile artists such as Carter Beauford, Neil Peart, Stanton Moore, Jason Bonham, John Tempesta, Vinnie Colaiuta, Todd Sucherman, Carter McLean, Jason Sutter, Matt Chamberlain, Joey Waronker, Will Calhoun, Matt Cameron, Ron Bruner Jr., Bill Cobham, Steve Gadd, Matt Johnson, and many others.
Posted by Dunnett Classic Drums at 12:41 AM 1 comment:

I met Gergo years ago at the Montreal Drum festival. I had never heard of him prior to that. I was photographing the drummers for Modern Drummer magazine and there was a long list of names under the well-known headliners. Gergo Borlai was one of those names and like many others on that list I had never heard of him before. Sometimes - after being to as many drum shows, festivals, clinics and events - you can get a little apathetic about new drummers. I thought I'd pretty much heard everything. I was wrong. I took a few pictures of Gergo and was about to step outside for some air when I stopped in my tracks...and listened. Hmm. I turned and headed back to the stage and watched more. I realized a few things as I watched Gergo's performance...THIS was the guy I heard in my head when I tried to play and no Ronn, you haven't heard everything so sit down and tune in. And I did. By the time Gergo was done performing I did something I rarely do - I went up and introduced myself. He knew who I was (he is always so kind) and now I knew who he was. We became friends immediately and the rest, as they say, is history. If you don't know who Gergo is, you will after you watch this video. Enjoy!

Posted by Dunnett Classic Drums at 8:23 AM No comments:

I (we) are in the process of rebuilding dunnett.com after removing the version that was originally created using Joomla. Joomla is a big, fat, moist invitation for trouble and I got suckered into using it. I expect things will be back to normal within a week or two and I'll gradually start repairing the images. In the interim I'm posting updates on social daily - Facebook, twitter and drumsmith.com!
Posted by Dunnett Classic Drums at 9:37 PM 3 comments:

I'm certain I did not miss my calling as the Sham-Wow guy, but...I sold my dogs. I do my own barking...

I've made thousands of drums - thousands. Out of those there are a few that I've really want to keep. None so much as this one. This is a bespoke clone of one of the first wood shell snare drums I made under the Dunnett brand. The original has been in countless studios and is on countless recordings. On a recent outing a drummer who I consider to be a friend asked if I would make him one. I've often turned down requests to make another one but this was a request I could not refuse - even though I wanted to. Now I'm glad I said yes. This drum - like the original - will make you forget everything you think you know about snare drums.

Finally! The revised Dunnett R4-L throw offs have arrived. The R4-L is the last replacement for your Ludwig P-85 and P-86 strainers. Designed to fit ANY Ludwig Supraphonic, Black Beauty or Acrolite snare drum. Available through any Dunnett Classic dealer or Big Bang distribution.


My friend John Emrich sent this to me this morning - it is his explanation of the imaging techniques used to capture the Dunnett Classic Titanium set for the BFD2 module. John did some interesting experiments and came up with a unique way to really extract every ounce of Titanium beauty...


Posted by Dunnett Classic Drums at 9:08 AM No comments: